I take no position on the political question of which administrative entity shall rule any individual person of ethnic Armenian or ethnic Turkish origin. However the USSR is a member of the UN and signed various treaties. Azerbaijan and Armenia are bound by these treaties, and are subject to all international laws on human rights.

I know of the turbulent history of the Armenian peoples and all the Caucasian peoples over the centuries and of the last several years including the hundreds of thousands of innocent refugees from both sides. No aspect of this history with its millions of individual tragedies, is justification for any violation of human rights by either the government of Armenia or the government of Azerbaijan. They have the duty to protect the citizens within their territories no matter what their ethnic origin. If they fail in this, the USSR must intervene. If the USSR does not, the UN must call the USSR to account.

2) The arrangements for the visit

I travelled as part of a “group of experts” of the 1st International Sakharov Conference “Peace, Progress and Human Rights” on May 25-29, 1991, led by Baroness Cox of Queensbury, Deputy Speaker of the House of Lords, United Kingdom.
We had visas for Erevan and Baku, approval from the USSR, but promises of protection only from the authorities of Armenia(1) We therefore started our visit in Erevan, Armenia. Although the protection of Azerbaijanian authorities was lacking, I and five others crossed the Armenian-Azerbaijani border at one location near Voskepar and other members of the group at two other locations. I interviewed villagers on both sides of the border; and talked to a major of the Azerbaijan OMON (the Azerbaijani local defense force), and the regional head of the Armenian KGB. 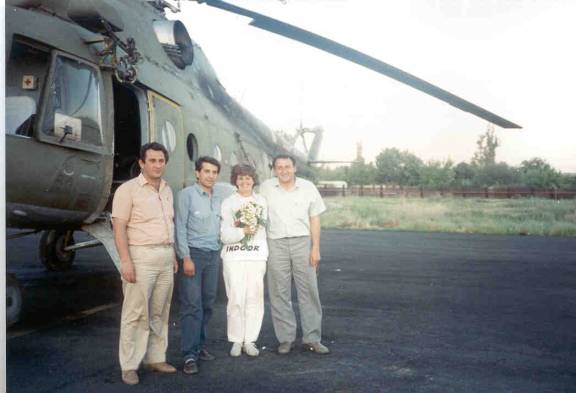 Baroness Cox with the Helicopter Pilots on our Retur

The group, including myself, met refugees from the town of Getaushen (Tchaikend) (3000 inhabitants) who had been deported in the last month. Among the refugees we met families of ethnic-Armenians held prisoner in Azerbaijan. We met Armenian physicians who had gone to Nagorny-Karabakh to treat the sick. The physicians had been jailed and beaten. We photographed their bruises.

Others of the group met refugees from other locations, and interviewed Soviet Army officials. When together, we compared notes and corrected minor discrepancies.

There was a remarkable consistency between the stories of individual villagers, and of others. I believe, that this consistency attests to the truth of their stories. During the deportations there were numerous civil rights violations of several types:

– killings
– multiple killings
– beatings
– forced abductions and imprisonments
– rapes
– stealing of property and livestock or buying for an insulting price (a car for 2 roubles!)
– obtaining “voluntary” requests to leave Azerbaijan at gunpoint or by other threats
– tearing ears of girls by forcible removal of earrings.

We found no evidence, in spite of diligent enquiry, that anyone recently deported from the village of Getaushen left it voluntarily.

Although most, if not all, of the beatings and killings were carried out by the Azerbaijan OMON, the Soviet Army was clearly not passive. They organized the initial surrounding of the village and then stood aside while the OMON terrorized the villagers. The Soviet Army arranged the transport of the villagers who were left on the Armenian side of the border with only the clothes they were wearing.

I paid especial attention to the situation in the Armenian village of Voskepar in northeast Armenia, and the neighboring village of Nishki-Voskepara in Azerbaijan. Intense fighting took place in Voskepar April 27th to May 6th. It is perhaps worthy of note that Armenia refused to sign the new Union treaty of April 23rd.

On April 27th firing started from the Azerbaijan side, on cars on the Armenian side of the border. The drivers fled on foot. When it was dark, the deputy mayor of the town went to the road junction, to cope with the cars. A Soviet armored car was there and called by radio for instructions: “We are under fire; what shall we do?” “Do not fire”. The chief of the regional KGB, Lev Arisimovich, (surname not readable from my notes) gave us “hearsay” evidence that Captain Baginsky was told that this troops would be fired on if they got involved. Three days later the regiment of Soviet internal troops on the Armenian side withdrew. (Date confirmed by Soviet general in Erevan).

A detachment (25 or 29 I am not sure which) of Armenian militia, under orders of the Ministry of Internal Affairs of Armenia, were coming to Voskepar by a back road at 5 a.m. on 6th May when they were ambushed by two Soviet army helicopters. Eleven were killed and the rest taken prisoner. The Armenians believe the prisoners have been handed over to the hated OMON. We saw about six damaged houses in Voskepar. In addition, 20 houses were burned out (by gasoline) and a church near the border with Azerbaijan. No villager dared to go there since.

To complete our picture, it was necessary to hear the views of the Azeri villagers and their OMON. The Armenian villagers tried to persuade us not to go. “It is dangerous. We cannot protect you.” We left the villagers behind and set off to walk the 1,5 km to the abandoned church and the OMON headquarters in the school of Nishki-Voskepara just beyond.

It seemed to take a year to walk that distance. Soon two OMON militia could be seen with submachine guns, then 5, then 20. With no incident, we, five plus interpreter, climbed the hill to the waiting OMON and Azeri villagers. 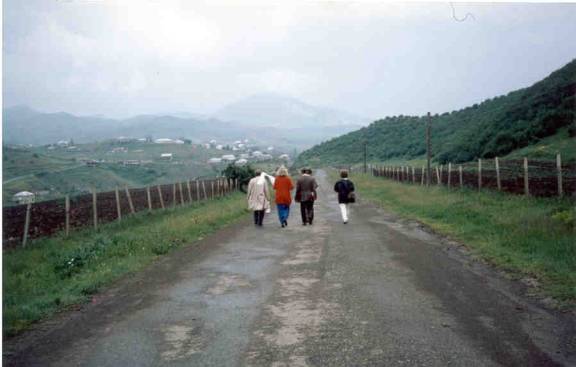 The parents of Major Moblouda, an ethnic turk, were sent from Georgia to Uzbekhistan in 1944 for which he blames Stalin and Mikoyan. Born in Ferghana in 1950, he had to leave two years ago with the Uzbek uprisings. It is sad that there should be so many tragedies in the one family. But they do not justify revenge.

We were shown the damage to the school and several houses caused by Armenian shells. We asked, but were given no dates of the damage and they seemed over a year old. On the whole, the older damage seemed greater in the Azeri side, but there was more and more recent damage on the Armenian side. The Major gave us a message for the Armenians.

“Tell them we will not give them an inch of our territory. When they were asking in a civil manner we gave them 200,000 hectares. By force they will not get an inch. If they are bad we will be bad. If they are good we will be good.” Other members of the group got similar statements in other locations.

My personal hope is that President Ter-Petrossian of Armenia and President Mutalibov of Azerbaijan visit these villages, and other points of conflict and side by side walk the same road, and reassure the villagers by their presence that fighting on both sides will cease. On Wednesday 29th May, many of our group met with Marshal Yazov at the defense ministry. We asked that each and every prisoner taken by the Soviet army be granted civil rights regardless of his alleged crimes. Their civil rights include, but are not limited to:

Marshal Yazov agreed to look into this matter personally. It is up to others to make sure that he keeps his promise.*

In view of the evident involvement last month, of the Soviet Army on one side of the conflict, in violation of Soviet Law and of human rights, I suggest that this conference pass a resolution.

“Members of the 1st International Sakharov Conference on Physics, present at the afternoon meeting in Moscow on May 31, 1991, having heard the report of one of our number, Professor Richard Wilson of Harvard University, call upon Mikhail Gorbachev, President of the Soviet Union. We ask that he notice the obvious involvement of regular troops of the Soviet Army in gross violations of civil rights during the last five weeks. We ask that he call a halt to all mass deportations. We ask that he order that those persons forcibly deported from their ancestral villages be allowed to return home. Finally, we ask that the OMON troops be asked to withdraw from the border and preferably disband, and the Soviet troops be from other republics. Finally, we suggest that he invite UN observers to preserve the peace, and to protect the civil rights of all citizens of the region.”

Voted by a majority of those present (about 150) with one against and seven abstainers.

Academician Keldysh in the Chair.

* Note written later. Marshal Yazov kept his promise. By mid-July 1991 all the Armenian militiamen were released. By mid-August Marshal Yazov was himself in jail as a result of being part of the abortive coup.

** Second note written later. An officer (Russian) of the Soviet 4th army in Azerbaijan told a member of our group in May 1991 that there were some orders that his army (being 80% Azeri troops) would not obey. Marshal Yazov told us a lot of what appeared to be irrelevant information; that he hoped to have all troops out of Germany and all heavy weapons out of eastern Europe by the end of Augst 1991. It seems likely in retrospect that Marshal Yazov was preoccupied by removing the tactical nuclear weapons from Azerbaijan. I have been told from US sources that there were many in Azerbaijan in May 1991 but they were all out by August 1991.

*** On Friday, May 31, 1991, five other members of the group met President Mutalibov of Azerbaijan for four hours in Baku. However, they were denied permission to visit Stepanekert or any other area of Azerbaijan with ethnic Armenians. However arrangements were made by the Chairman of the Supreme Soviet of the Soviet Union for them to visit at the end of July 1991. Baroness Cox accordingly led a group there at that time.