Armenia: An Open Letter To Senator Alfonse D’Amato and Congressman Dante Fascell: In light of the request by the USSR for renewal of its financial credits and “most favored nation” status, we wish to report that brutal events virtually unknown since Stalin’s time are occurring today in the Soviet Union. Soviet army and special troops have

US Senators letter to Mikhail Gorbachev U.S. Senate, Washington, DC, January 18, 1990. His Excellency Mikhail S. Gorbachev, President of the Soviet Union, The Kremlin, Moscow, U.S.S.R. Dear Mr. President: We are deeply concerned about the murders, tortures, and property destruction that the Armenian community of Baku has suffered over the past six days as a result of attacks by organized

Indifference and silence can cause another genocide 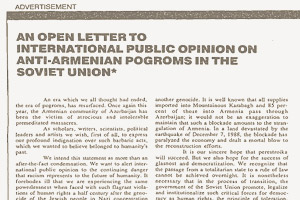 AN OPEN LETTER TO INTERNATIONAL PUBLIC OPINION ON ANTI-ARMENIAN POGROMS IN THE SOVIET UNION An era which we all thought ended, the era of pogroms, has resurfaced. Once again this year, the Armenian community of Azerbaijan has been the victim of atrocious and intolerable premeditated massacres. As scholars, writers, scientists, political leaders and artists we