Moscow News about Operation Ring: There was massacre of Armenians in Getashen 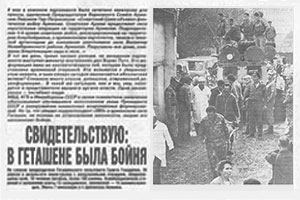 On May 6 a statement for the press was read in the Union Parliament made by the Chairman of the Supreme Council of Armenia, Levon Ter-Petrosyan: “The Soviet Union actually declared a war on Armenia. The Soviet Army continues its punitive operations in the territory of Armenia. The subdivision of the 4th army of the Soviet troops deployed in the territory of Azerbaijan, used helicopters, tanks and heavy artillery to wipe out the village Voskepar of the Noyemberyan region, Armenia to its basis. All houses are destroyed, nearby gardens and woods are burned…”

The Ministry of Internal Affairs, KGB and the Ministry of Defense of the USSR in a joint statement justify the incident by the execution of the decree of the President of the USSR on disarmament of illegal armed groups. But what the correspondent of MN saw in the Armenian village Getashen resembles a massacre, rather than establishment of the rule of law.

I TESTIFY: THERE WAS MASSACRE IN GETASHEN

It was an expected war (MN, N 5, 1991, “Shahumyan region – war at the workers’ requests?”). Shahumyan region and Getashen village, adjacent to Nagorno Karabakh, did not obey the decision of the session of the Azerbaijani Armed Forces in January 1991; the Armenian-majority area did not go to merge with the Azerbaijani Kasum-Ismailov region, and the residents of Getashen did not fulfill the demand of the republican authorities to leave the village and look for “a refuge outside the republic.”

“The revolt” was followed by punishment: food, even bread is not supplied here, salaries are not paid for the third month, all roads are blocked, since April 13 electricity, water, radio broadcasting are disconnected. The only connection with the outside world is through the helicopters from Yerevan, and the subdivisions of the internal troops of USSR Ministry of Internal Affairs are the guarantee for safety. But Getashen was even deprived of this last hope for stability on April 15.

“The subdistrict of Getashen is not adjacent to NKAO,” the chief of the commandant’s headquarters of the state of emergency area, Colonel Vyacheslav Lebed, declared, “therefore it is not included in the state of emergency area. For this reason, internal troops of the Ministry of Internal Affairs of the USSR are withdrawn from there on April 15.”
The Colonel asked to refer to the Minister of Defense of the USSR, Dmitry Yazov, and the Minister of the Internal Affairs, Boris Pugo, with the question “Why had they been brought in then?” On their orders helicopter flights from Yerevan to Getashen and Shahumyanovsk were banned on April 24. Justification: these flights are used to transport weapon and ammunition to the Armenian fighters. In this way Getashen was isolated from the outside world.

MAY 1: THERE WILL NOT BE WAR TODAY

I got to Shahumyanovsk on May 1 by the noon. By this moment the city quieted down in panic melancholy. On the 30th in the afternoon after the transceiver crackled: “Rescue! We are killed”, the connection with Getashen broke off. Helicopters with red stars on the sides first hovered over the city, and then began to throw smoke grenades.

Communication with Getashen at last recovered on May 1, and Shahumyanovsk understood: there will not be war today. Consent was received from there to the state of emergency area commandant’s request to take out the wounded and the killed from the encircled village. The chief of the headquarters of city commandant, Major Nikolay Kurbalenko, went to Getashen at the head of a column of three APCs. The 30 kilometers long road lasted for 16 hours. The first post of OMON explained that it was impossible to go to Getashen because it did not exist, but there was the Azerbaijani village Chaykent.

Getashen met us by the smoke of fires and hulks of tanks. They took the village in ring along with airborne combat vehicles and infantry troops. Our APCs were allowed there one by one and accompanied by armored fighting vehicles which participated in the assault.

The column was stopped opposite the hospital and immediately surrounded by the OMON fighters dressed in spotty uniform. I felt like a captive. The blood-stained corpses rolled before the threshold of the house. The ears of some of them were cut off and face whipped beyond recognition. Almost all of them had a knife hole torn in their throat.

The building, riddled with bullets, smelled of death. People sat or lay, as if hypnotized, on the floor and beds in the corridors. Some had their hands shot, and others – legs. A dead person’s scalp had been pulled off, and those alive looked harassed into the emptiness. Only a tiny girl spoke. She sat by a female corpse which was chopped up on pieces and muttered, muttered something. Seeing the military, the girl froze in a silent scream.

Having recovered from shock, the soldiers of internal troops started taking out wounded and killed, but it became clear that three APCs were not enough. The soldiers grimly carried their load and saw how indifferently the other soldiers and officers watched them. They were separated by the tank armor and by the different orders they followed. “They are not ‘members of internal security forces,’ soldiers and officers of the regiment billeted in Shahumyanovsk confessed later on the way. They were the first to notice that shelling of the village, close to Getashen, Martunashen, began. A few hours later, when we were flying close to it on the helicopter, ruins that remained from the houses were smoking even after a heavy rain. 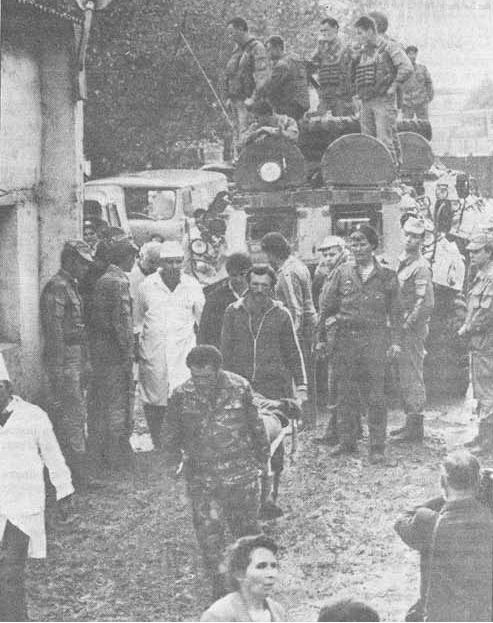 WHAT HAPPENED AFTER ALL?

Who gave the order to assault Getashen and Martunashen? What military units carried it out? The independent commission of the Supreme Council of the USSR can know and estimate it. People’s Deputy of the USSR, Colonel Vilen Martirosyan, who arrived to Shahumyanovsk on May 2, insisted on its creation after the officers of internal troops who had been in Getashen presented their explanatory notes to him.

According to the testimonies of the witnesses exiled from Getashen, the soldiers and officers of the Soviet Army were the first to enter the village on April 30 early in the morning. They demanded the passports of the residents, tore them and insisted on their immediate departure. They smashed furniture in the “refusers’s” houses, shot at the floor and ceiling. OMON fighters rushed in after them and still later marauders came on cars. They took out carpets, furniture, took off the jewelry.

OMON fighters brought 53 peasants to the neighboring village Kamo where the chief of Hanlarsky regional police department Mamedov declared them hostages. One of them, Arsen Aganesyan, was sent back to fellow villagers with the ultimatum: if they did not sign a paper about voluntary departure from Chaykent, the hostages would be shot. The residents of Getashen listened to this ultimatum by following the command: “Muzzle down!” At that time OMON fighters walked on their backs.

The document testifying the voluntary desire to leave the village was signed by 750 people. Soon 38 hostages were returned, but the siege continues. Terms of the Azerbaijani side: the rest will be given out if Armenians release Chaykent completely. In revenge, the Armenian side disarmed the divisions of the internal troops of the Ministry of Internal Affairs of the USSR in Ijevan (Armenia). On these days firing began and did not cease in the territory of Kazakh region of Azerbaijan and in the neighboring regions of Armenia and Azerbaijan.

AGAIN ON THE EVE?

Shahumyanovsk also prepares for the worst. When it accepted the first victims of the tragedy of Getashen, there was a shootout in the neighboring villages Buzlukh, Manashid and Erkech. People have got used to its crash and do not pay attention. The threat of hunger does not frighten them too. Most of all Shahumyanovsk is afraid of repetition of Getashen scenario – withdrawal of internal troops. “If they leave we will wait when we will be killed,” pensioner Knarik Aleksanyan says