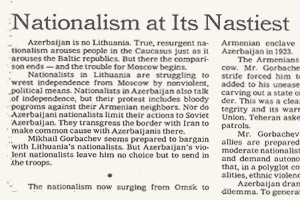 ”Nationalism at Its Nastiest” (editorial, Jan. 19), about the Azerbaijani-Armenian conflict, needs one important clarification. You write that ”After the 1988 earthquake that killed 25,000 Armenians, Azerbaijanis blocked railways to Armenia, holding up aid.” This is true, but this blockade has continued since the earthquake, at various levels of intensity, and today there is a serious situation in Soviet Armenia because of the Azerbaijani blockade of the Armenian republic. There is practically no fuel left, the supply of food is dwindling, factories are closed because of shortages, and according to latest reports reaching us, there will be no electricity within the next few days.

All of this for a small country that has not yet recovered from the December 1988 earthquake. The population in the earthquake zone is still without permanent housing. The survivors of the earthquake need intense medical and psychological aid. Before the earthquake, thousands of refugees from the disputed Nagorno-Karabakh region sought refuge in Armenia. Now, with the current atrocities, Armenia is faced with a growing number of refugees as the formerly Armenian-populated areas of Azerbaijan are emptied.

The situation can no longer be dismissed as ”nationalism.” It is an attempt, first, to annihilate the Christian minority in Azerbaijan and, second, to blockade the Armenian republic, causing grave hardships to a people already in the midst of great suffering. 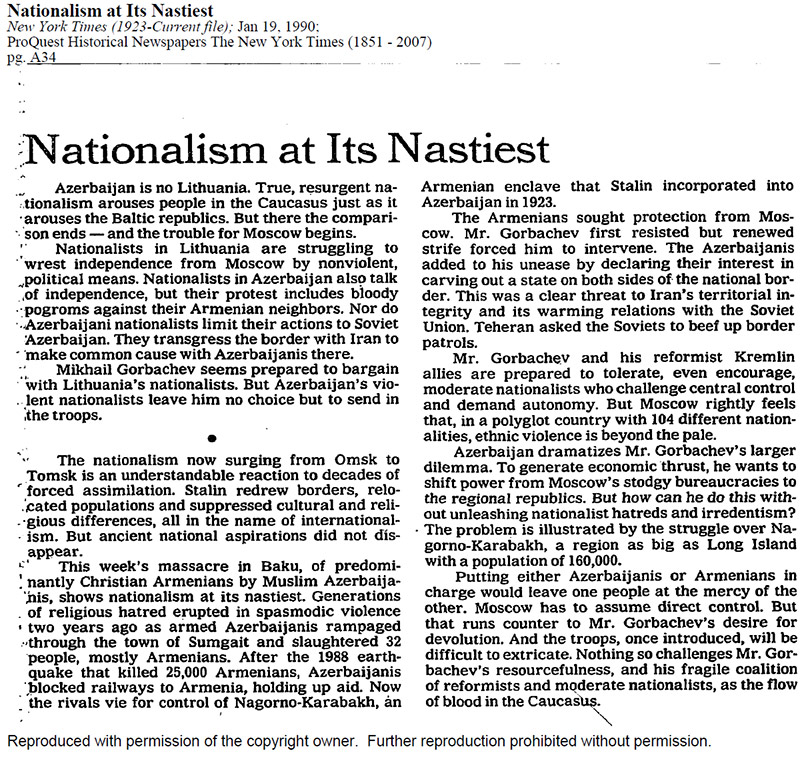