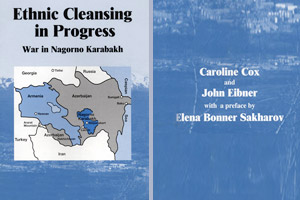 Maragha: The name of this village is associated with a massacre which never reached the world’s headlines, although at least 45 Armenians died cruel deaths. During the CSI mission to Nagorno Karabakh in April, news came through that a village in the north, in Mardakert region, had been overrun by Azeri-Turks on April 10 and there had been a number of civilians killed.

A group went to obtain evidence and found a village with survivors in a state of shock, their burnt-out homes still smouldering, charred remains of corpses and vertebrae still on the ground, where people had their heads sawn off, and their bodies burnt in front of their families. 45 people had been massacred and 100 were missing, possibly suffering a fate worse than death. In order to verify the stories, the delegation asked the villagers if they would exhume the bodies which they had already buried. In great anguish, they did so, allowing photographs to be taken of the decapitated, charred bodies. Later, when asked about publicising about this tragedy, they replied they were reluctant to do so as “we Armenians are not very good at showing our grief to the world”.

We believe it is important to put on record these events and the way in which they have, or have not, been interpreted and portrayed by the people themselves, and by the international media. International public opinion is inevitably shaped by media coverage and the Azeri-Turks certainly won great sympathy through their presentation of the ‘Khodjaly massacre’.

Conversely, the Armenians received much criticism and lost a great deal of political support as a result of their alleged behaviour at Khodjaly. The international media did not cover the massacre of the Armenians at Maragha at all. Consequently, in the eyes of the world, the armed forces of the Armenians of Nagorno Karabakh have been made to appear more brutal than those of the Azeri-Turks; in reality, evidence suggests that the opposite is more likely to be true.