"An Ordinary Genocide" project manager: Many Armenians of Baku were thrown into the Caspian Sea: the death toll remains unknown 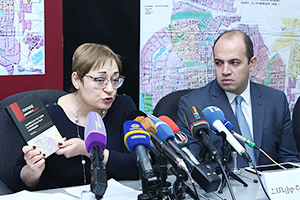 The project "An Ordinary Genocide" is making videos entitled "I accuse Azerbaijan" where the eyewitnesses are telling the horrible incidents that occurred in Baku, Sumgait and Maragha. One of those videos was presented during today’s press conference. The video showed one of the eyewitnesses telling about the tragedy in Baku. "An Ordinary Genocide" project manager Marina Grigoryan told reporters, Panorama.am reports. She noted that over 30 videos have been translated into English and they are to be released in the international platform in the coming days.

"All the testimonies collected within the project come as a real accusation against the criminal and genocidal policy of Azerbaijan," she noted.

M. Grigoryan informed that the project "An Ordinary Genocide" is implemented by the Public Relations and Information Centre of the RA President’s Office and throughout the year a number of events will be held to mark different incidents. "Throughout the entire year we are going to hold events in different languages in various, including in international media platforms and to release materials aimed at revealing the lies and the falsification of the Azerbaijani propaganda and presenting the reality. To carry out these activities we cooperate with different state bodies, namely with the Ministries of Foreign Affairs and Diaspora," she noted.

Speaking about the pogroms of Armenians in Baku on 13-20 1990 M. Grigoryan noted that the Azerbaijani people mark January 20 as a tragedy day when the Soviet troops entered Baku.

"The turmoil Azerbaijan is raising on every 20 January in the last 27 years aims at silencing and making forgotten all the events that took place in Baku during 13-19 January, 1990. In a week they killed, tortured, robbed, burnt alive, raped and forcibly deported the Armenians in Baku. However Baku has forgotten the fact that the eyewitnesses of those incidents are still alive: thousands of people who have faced that tragedy, lost their relatives and property," project manager of "An Ordinary Genocide" said.

She noted that few documents are available on the Baku pogroms to compare with the Sumgait massacres. Within the program "An Ordinary Genocide" it was decided to fill this gap by the testimonies of the eyewitnesses of the massacres. They initiated a sub-project entitled "A Century-long Genocide" within the framework of which they have listened to and recorded all the stories and memories of the eyewitnesses as an evidence of the genocide against the Armenians of Baku.

"For that purpose we departed for the US twice, as over 60.000 Armenians moved to the country from Baku in 1990s. We have videotaped 150 Armenians of Baku. As a result we produced the movie entitled "A Century-long Genocide: Black January of Baku". It was screened in 2015 making up a part of the events commemorating the 100th anniversary of the Armenian Genocide," she said adding that on the basis of that interviews they have published a book featuring 50 testimonies of the Armenians of Baku. They are already working on the second book which will include some 60 memories of the eye witnesses.

In her words they have revealed a series of facts and details completing the atrocities committed by Azerbaijan. "For instance we did not know that started from the January of 1990 Armenians were held as hostages in Baku. A fugitive woman told us that she had been held as a hostage in horrible conditions in a year. Different families were held together with her. She managed to survive due to a miracle. Another new revelation referred to the fact that those Armenians who were trying to flee from the Baku massacres by ferryboats, were simply thrown into the Caspian Sea. I guess many Armenians of Baku ended up in the sea. We will never know the exact number of those victims.

We have also collected documents the refugees managed to take with them. We have revealed a unique document issued by Baku’s military commandership. The document reads that the family had to be evacuated as their lives were in danger in that city.

We also revealed the fact that criminal cases have been launched in Baku upon the legal claims of many Armenians. However the cases were not completed which once again proves that the massacres of Baku were state-sponsored and the Azerbaijani leadership ordered the law enforcement bodies to drop all the cases and halt the investigations," M. Grigoryan added.

She said that on the basis of their evidences they assume that a total of 500-600 Armenians were killed during the pogroms of Armenians in Baku.

"All the incidents that happen in the recent years, particularly the murder of an Armenian commander in Budapest, the murders of the Armenian servicemen on the Line of Contact, the April war, the Azerbaijani aggression unleashed near Armenian village Chinari, come as a continuation of Azerbaijan’s policy resumed still in Sumgait in 1988. Having no Armenians left in their territory to commit massacres against they continue running their policy in Artsakh and Armenian borders," M. Grigoryan concluded.

Political scientist Hrant Melik-Shahnazaryan who participated in the press conference, noted that at least three pre-planned genocides were committee against the Armenians of Baku in 1905, 1918 and 1990 respectively.

In his words the policy of eliminating Armenians was a well-developed one which initiated in the last years of the Soviet Union and continued so long as Azerbaijan has had a potential to take steps.

"Now we have testimonies, fact-finding activities are carried out which will become a serious ground for the revelation of Azerbaijan’s anti-Armenian policy. These activities will promote the further establishment of diplomatic relations and will enhance our position in the talks, as we base ourselves on the clear facts.

We can observe that such facts are missing from the negotiating table. The most important issues people are concerned about are not included in the talks and the regional political developments," he said.

Hrant Melik-Shahnazaryan informed that they are going to produce a film about the blockade of Stepanakert when 50.000 inhabitants were under the daily danger of extinction being deprived of food, water, medication as the city was under shelling from all directions.