Ara Saghatelyan: People have been killed because of their national belonging 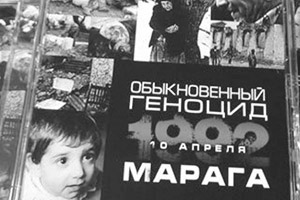 The premiere of “Maraga, 10 April, 1992” documentary, the third film of the “Ordinary Genocide” series, will be screened tomorrow, at 10 p.m., on Publiv TV of Armenia, the head of the public relations and information center of the Armenian President’s Administration Ara Saghatelyan said during the film presentation ceremony today.

A. Saghatelyan reminded that the film series will be done by the yearend. “Maragha is a theme, which, I think, has been left beyond attention for years, however, we have facts, a range of killings which evidence that people have been killed because of their national belonging,” A. Saghatelyan said.

According to him, there is another precedent of the Armenian Yeghern, planned and carried out by the political leadership of the neighboring country. He recalled that the “Ordinary Genocide” series included two films, “Baku, January, 1990” and “Sumgait, February, 1988”, “Maragha, 10 April, 1992” is the third one, yet to be followed by another documentary about “Khojaly”.

A. Saghatelyan drew special attention to this film noting that Azerbaijani leadership take any information on the issue painfully and this is against their official disposition.

“The work of our expert has showed that the way Azerbaijanis are describing Khojaly events, just have not occurred. Besides, we have assessments of many experts, including those well accepted by the Azerbaijanis that following Khojaly military operation Azerbaijanis kept firing in response to the activities of the Armenian troops,” A. Saghatelyan said.

He also added that in his videotaped interview, Thomas Deval says he has never thought or claimed that the activities were planned. While, as A. Saghatelyan noted, one of the messages of the Azerbaijani propaganda machine was, that Deval has claimed just the opposite.

Saghatelyan considered it proved that all thses occurred due to the activity and idleness of the Azerbaijani leadership. Besides, he said that they have other significant facts as well, while all the Azerbaijani propaganda machine spreads is done through additional shootings.

“An Ordinary Genocide” film series has been initiated and conducted by the “PR and Information Center” of the Armenian President’s Administration. The presentation of the first two films “Baku, January, 1990” and “Sumgait, February, 1988” was held in January this year. The film has been translated into different languages and spread on the internet and through DVDs.